This is Sheldan Nidle’s Update in June about the actual energies. To good to be true? It sounds really like a fairy-tale, but remember what Bashar said about what is happening now… The greatest shock in this age of transition: what you have thought all the time as Fairy Tales is actually the way life is. 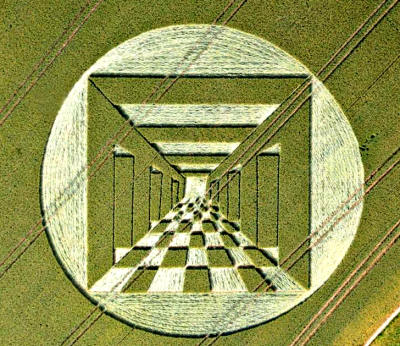 We return on this day to talk with you about a number of events that are close to happening. Every day for years, you have waited for the prosperity funds to finally arrive at your door. Every day, you have been disappointed when this did not occur. Our Earth allies have worked hard to make this manifest for you, and as we watched this situation, we noticed three predominant obstructive factors: first, the institutions that control and heartlessly manipulate your world were operating at full throttle; this is no longer the case: your governmental, political, and economic spheres are in disarray! Second, your various military and international enforcement institutions had not as yet made up their minds about the best direction for your world to take. These organizations have since made this decision and now whole-heartedly support change. Third, the underlying attitude of the world’s people was largely indifferent to any drastic altering of their realty, and this too has now changed: the level of anger at the state of global affairs and of longing for a new direction has reached critical mass.

These pivotal collective decisions, coupled with the great longing of the world’s people, are at last in alignment with the grand transformations espoused by our Earth allies, and so Heaven has acceded to our demands for a deeper involvement in your affairs. Until now, we had merely cajoled the dark cabalists and had not firmly convinced them of the urgent need for immediate surrender. They took advantage of our indirect stance to intensify the disaster growing in the Gulf of Mexico and had asked their minions to prepare a full doomsday scenario. We watch this in horror and are most relieved by the recent decrees from Heaven. Our task is to employ our personnel and ships in such a way as to force an end to this heinous activity. To this end we have had several sincere talks with Earth’s Spiritual Hierarchy in order to get the go-ahead for our diverse strategies. These are designed to push the dark out of the way and ensure the swift rise of our Earth allies. Accordingly, we have asked that all the teams, waiting in the wings to be the transitional regimes around the world, now make themselves known to us.

In this regard, we have provided these critical personnel with a series of lectures, followed by an open session of questions and answers concerning our mission to bring full consciousness back to this reality. During our recent set of talks with Earth’s Spiritual Hierarchy, it was made crystal clear that the present level of earth-changes activities such as earthquakes and volcanism was to continue on an ascending scale over the coming months. We are subject to a timeframe which behooves us to ensure that the requisite changes to your world happen now and not later. We have noticed the massive upwelling of magma throughout your planet. Tectonic-plate action is likewise increasing, and it appears certain that what we were told to expect is currently happening. Consequently, we have had many serious meetings with those who are to be in charge of the military and civilian government ministries in the transitional regimes. In a nutshell, we have initiated a plan whose purpose is to divest the dark cabalists of their present seats of power.

At the same time, we are to ensure that the prosperity programs, which are the final link to this transition, are delivered to their recipients. The purpose of this change is to replace your present illegal regimes with properly established de jure governments. Without Disclosure, our tasks are harder to perform successfully. Nonetheless, these divinely ordained activities must take place in the proper and agreed-upon ways, and to this end, our diplomatic and liaison forces are carrying out our plans according to the agreed legitimate format. We are busy making sure that the old regimes resign at the time jointly agreed to. To date, all is well. The dark understands what we need, and it is grudgingly complying. For our part, we are monitoring the activities of each group of dark minions as we fully expect some form of shenanigans. The secret-government elements behind some of your major governments have indeed put obstacles in our path, and we have responded by limiting the effects of these dirty deeds.

Mother Earth wants you to know that the present pace of earth changes is to accelerate, making the disaster in the Gulf even more of a threat. This situation is an incentive for all to do their utmost to remove the dark from power. It is no longer an option for these unrelenting ones to remain at the helm, and it is time that they meet with their just deserts. Your global societies need fundamental economic reforms backed by people-oriented government. Our direct intervention is also necessary because these regimes need considerable reliable oversight. Your world, for far too long, has looked to the dark, devious, and controlling ways of the Anunnaki’s minions for guidance, which is why some degree of initial mentoring is indicated. Also required is close interaction by each of you with your respective regimes. A cornerstone of galactic society is government that is fully responsive to an aware, informed, and dedicated body politic.

The old ways are to be transformed by an abundant and fearless populace. You need to regard yourselves as the “owners” of your local and national governments. Those put into power, even in the most propitious circumstances, can falter and require the people’s due diligence. We are here to be your mentors; to transform your consciousness; and to reconnect you fully with the Divine. As this happens, you will acquire new and inspiring areas of responsibility. This means you are to step outside your present “box,” thereby gaining access to a more responsive and knowledgeable you, and we will encourage you every step of the way. Higher consciousness naturally brings with it more wisdom, more connection with the Divine, and more sacred responsibility, building to the moment when you actually achieve full consciousness.

Our task is clearly defined. What you have made of yourselves is no longer sufficient, which is why Heaven embarked on her program of moving you up to full consciousness. This jeopardized everything in your environment as this reality can no longer sustain itself. The chain of life that supports you is badly crippled and cannot be repaired. This pushes you to the next level, and indeed it is only higher-level technologies run by higher-conscious Beings that can restore viability to your reality. This new, transformed reality is to be home to fully conscious Beings; and these Beings are of course to be you. They will require mentors only in the beginning; then their own wisdom can propel them toward their divine destiny. This destiny includes the forging of a new star-nation and becoming an important part of the Galactic Federation of Light.

Your world is to see this happen now! We are moving forward with our pieces of the puzzle and are ready to make it all happen. The dark sees its nemesis looming and knows its time has come! The reins of power are to pass to our Earth allies, and the first items on their agenda are the new economic-financial realities and a reversal of the catastrophe forming in the Gulf. This leads to the end of the UFO cover-up, which permits us to intervene in a more public way. Central to this is the open acknowledgment of the partnership between the Earth allies, the people of Earth, and the first contact team. This partnership is to clean up your planet, start you on the road to full consciousness, and allow you to become accepted citizens of the Milky Way Galaxy.

Today, we brought you up to date regarding what is happening on your world. Your reality is more than ready to be transformed by Heaven, by you, and by us, and all in a very short period of time. We look forward to the grand reunion and to helping you complete your transformation into fully conscious Beings. Know, dear Ones, in your Heart of Hearts that the countless Supply and never-ending Prosperity of Heaven are indeed Yours! So Be It!

Selamat Gajun! Selamat Ja! (Sirian for Be One! and Be in Joy!)

Your natural self is a balanced self; it is a healthy self. Allow yourselves to understand that a preoccupation with being healthy can sometimes be an indication of holding on to a belief of disease. The self that is balanced does not think about the idea of trying to be healthy. END_OF_DOCUMENT_TOKEN_TO_BE_REPLACED

Ben Stewart, philosopher, musician and producer of the movie Esoteric Agenda speaks in Kymatica (83 min.) about the consciousness of human beings – of the consciousness of each cell – and of all consciouness that exists.  In one part of the movie he speaks about the role of the heart which “generates the strongest rythmic electro-magnetic field in the body”. And this electro-magnetic field changes when the felt emotions change.

Science only discovers now what a lot of teachers – physical and non-physical – are saying since a long time:  Follow your heart! But of cource, few people would like to follow dark and painful emotions. So that’s why one must generate Positive Feelings – lighten up the electro-magnetic field so to speak – if one wants to have beautiful and joyful experiences.

Another movie which I would like to recommand is the Holographic Universe.  All these movies show a new way of thinking and are at the top of the crest of this wave of consciousness which will change our perception, and I may add, this change is very different from what our so-called “leaders” expect… 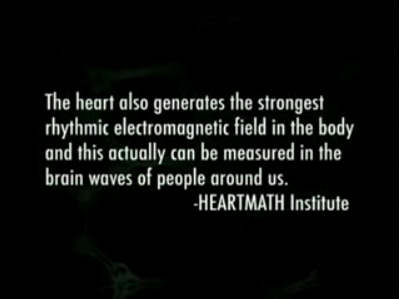 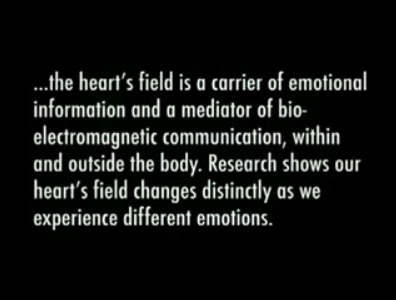 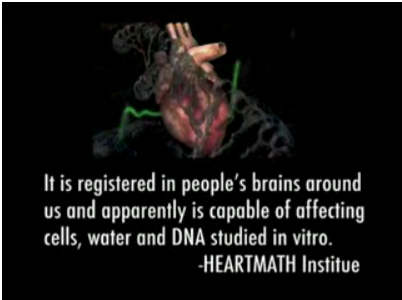 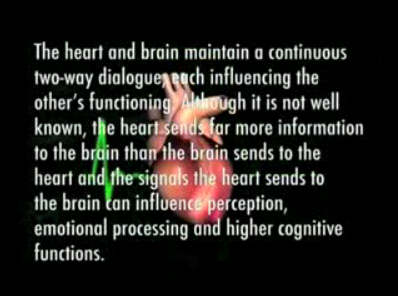 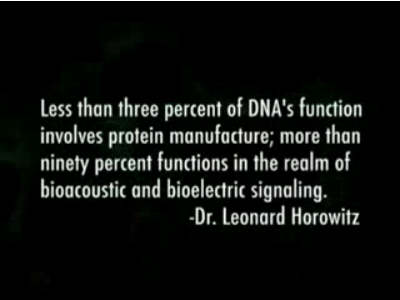 An extraterrestrial view on the Financial Crisis from Bashar …
Q: Our financial system is apparently going through a chaotic transformation END_OF_DOCUMENT_TOKEN_TO_BE_REPLACED

Taste!  Smell!  Listen!  Touch! Use your five senses to be more aware of your world, which is you. Take i.e. a bird’s perspective or view things by an ant’s view. Or as Marcel Proust said: END_OF_DOCUMENT_TOKEN_TO_BE_REPLACED